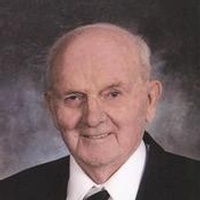 He was born on June 25, 1926, to Adam & Theresia (Heintz) Geier at his parents' home, where he grew up and attended rural school in Roscoe, SD. He married Magdalena Malsam of Hillsview, SD on January 13, 1947.

Wendelin & Magdalena farmed the family homestead until retiring in 1991. He enjoyed dancing with his beautiful bride, family gatherings, card playing (especially pinochle), visiting with friends and family, watching EWTN, taking care of his lawn and garden, going to church almost daily, and most of all farming.

Wendelin was a man of great faith. His life & death are a testimony and witness for many. He lived a life of simplicity, sharing with others in word and deed. He leaves a great legacy for his children, grandchildren & great -grandchildren.

Wendelin Geier passed away Tuesday, March 5, 2013, at his home, surrounded by his family.

To order memorial trees or send flowers to the family in memory of Wendelin Geier, please visit our flower store.