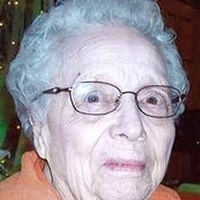 Visitation one hour prior to both services.

Vivian was born to Percy and Edna (Schnorr) Ryman on April 7, 1923 in the Mansfield, SD area. Her family moved to a farm near Onaka, SD when she was seven years old. Vivian attended country school before attending Onaka High School.

She married Vandline "Van" Vetch on October 30, 1939 in Onaka, where they were active members of St. John the Baptist Church. They made their home on the family farm east of Onaka. In 1943, they moved to and purchased the Ryman farm, north of Onaka. Together they farmed and raised their family.

Vivian's home was a gathering place for her family and friends. Along with family gatherings, she hosted many Saturday afternoon coffee parties. She was known for her baking and having everyone's favorite treat on hand when they came to visit. Vivian was also noted for her keen memory of family history and events.

In 2002, Vivian moved to Aberdeen into Bethesda Towne Square, where she could be closer to Van. He passed away on May 15, 2004.

Vivian led by example and her unconditional love. With gentleness, quiet faith, endless patience, and concern, she warmed the hearts and calmed the souls of the many people whose lives she touched. She will be dearly missed.

Despite continued health limitations, Vivian remained active, always finding a way to smile, and continuing to surprise her family with her wonderful sense of humor, even in her last days. Her favorite pastimes included playing cards, particularly whist, and listening to old time music, which reminded her of the wonderful times she and Van spent at dances.

She looked forward to attending weekly bible study and all of the church services at Bethesda. She delighted in visits from all her "angels"-her family and friends-whom she cherished.

Vivian was fond of gardens and the beauty of flowers. She found peace in a stroll through the gardens of Bethesda Home. Vivian went to be with her Savior and walk without pain through Heaven's gardens on March 19, 2011.

To order memorial trees or send flowers to the family in memory of Vivian Vetch, please visit our flower store.