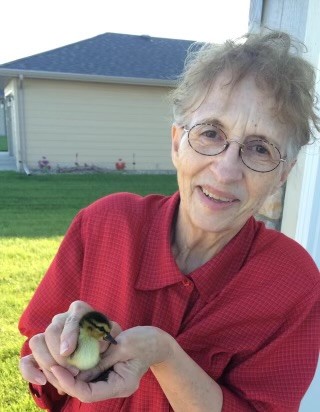 The Memorial Service for Vernita Tuscherer, 79, Aberdeen, will be at 10:30am Saturday May 7, 2022, at Richland Church, Mina SD, with Pastor Jason Dignan officiating. A time of food and fellowship will follow at the church prior to inurnment at St. John Cemetery, Onaka SD. The service can be viewed via livestream at www.richlandchurch.org and will also be available for viewing after the burial at www.leonardfh.com. Vernita passed away on Monday, April 25, 2022, at Bethesda Home of Aberdeen.

Vernita Marie Vetch was born on March 19, 1943, to Vandline and Vivian (Ryman) Vetch in Faulk County, SD. She grew up and attended a country school in the Onaka area and attended high school in Cresbard and Roscoe. On October 8, 1960, she was united in marriage to Donald Tuscherer at St. John the Baptist Church in Onaka. Six children were added to this union.

Vernita and Donald settled on a farm near Onaka where they raised their family. Vernita was dedicated to the farm and her family, rising early in the morning to help milk cows before preparing a homemade breakfast for her family. Vernita was a wonderful cook and baker and was known for her homemade noodle soup and kuchen. Her cooking skills were so renowned that she was asked to prepare meals for countless area weddings and other events. Vernita enjoyed dancing, studying her bible and working at the Tolstoy Community Café. She cherished her time with her family and grandchildren.

Above all, Vernita was dedicated to her faith in Jesus Christ. While she was raised in the church, her faith was renewed and strengthened later in life where she was baptized as an adult in 1995. She shared her faith with her family and others and was committed to her church and bible study groups.

Arrangements are with Leonard-Gramm Funeral Home of Ipswich. Condolences and memories may be shared with her family and flowers ordered at www.leonardfh.com

To order memorial trees or send flowers to the family in memory of Vernita Tuscherer, please visit our flower store.