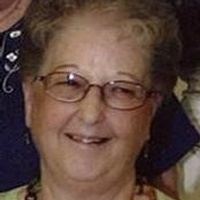 The funeral service for Thelma D. Neu, 79, Redfield, is 1:00 pm Friday at Messiah Lutheran Church in Redfield. Burial will follow at Grace Cemetery at Rockham. Rev. Peter Utecht will lead the service.

Visitation is 5-7:00 pm Thursday at the church in Redfield and continues one hour prior to the service on Friday.

She married Carl Neu on January 17, 1949. They raised four children (Ellen, Gerry, Dale and Kenny). Thelma and Carl farmed and ranched south of Rockham raising pure bred Hereford cattle and their family. They retired in 1989 and moved to Redfield.

Thelma enjoyed quilting, crocheting, sewing, raising chickens and geese as well as cooking/ baking for her family and friends. She also enjoyed gardening, canning, growing flowers, playing bingo and going on bus trips to Flandreau. She was a member of the Red Hat Ladies and Redfield Senior Center. Thelma was baptized Lutheran and a member of the Messiah Lutheran Church and LWML. She enjoyed being a Twins fan. Most of all she enjoyed spending time with her grandchildren and her great-grandchildren.

She is preceded in death by her parents, Harley and Eva Peterman and husband Carl Neu, brother John Peterman, sisters, Vera Comstock and Ruth Gregory and great-granddaughters Hannah Lemecke and McKenzie Marlow.
Services with Gramm Funeral Home of Ipswich.

To order memorial trees or send flowers to the family in memory of Thelma Neu, please visit our flower store.