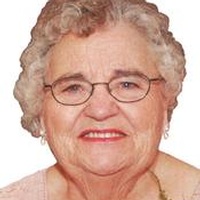 Mass of Christian burial for Ruth L. Simon, 84, is 10:00 AM Saturday at Holy Cross Catholic Church in Ipswich with Fr. R. Phillips, Celebrant.

A Liturgical Wake Service is 5:00 PM Friday with visitation starting at 2:30 PM all at Holy Cross.

In lieu of flowers memorials to Ipswich Senior Citizens Center are preferred.

Ruth L. Simon was born on her parents' farm near Cresbard, South Dakota on August 20, 1926. She was the daughter of Albert C. and Emma P. Wegner. Ruth graduated from Cresbard High School and received a teaching certificate from Northern State Teachers College in Aberdeen, SD.

She was employed at the Liberty Bell Township School.

Ruth married Emil J. Simon June 1945. They owned and operated a dairy farm and raised a family of 14 children. In 1997, Ruth and Emil retired from farming and moved to Ipswich. They had been married for 55 years when Emil passed in June of 2000.


She was involved in the community through leadership roles in several organizations. She was the President of the Senior Citizens Center and 1st Vice President the American Legion Auxiliary at the time of her death. She was a member of the Holy Cross Altar Society, St. Gerard Study Club and the Ipswich Sewing Club.


Ruth considered her most valuable role being a wife and mother. She was instrumental in her grandchildren's lives. Ruth was a humble woman with a great sense of humor.

To order memorial trees or send flowers to the family in memory of Ruth Simon, please visit our flower store.