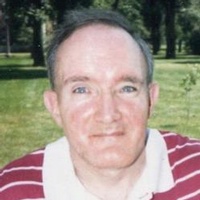 Mass of Christian burial for Richard J. Jangula, 74, of Ipswich, is 10:30 AM Saturday at Holy Cross Catholic Church in Ipswich with Fr. Russell Homic, Celebrant. Interment will be in the Holy Cross Cemetery.

Richard was born October 14, 1940 to Joseph and Katherine (Glatt) Jangula on the family farm near Artas, SD. When he was five years old, the family moved to a farm north of Craven Corner where Richard loved all the animals and helping his brothers and sisters with chores. When his father was stricken with illness, the family was forced to move to Aberdeen, SD.

Richard was stricken with Cerebral Palsy. As he grew older his parents could no longer care for him and he was moved to the state hospital in Redfield. The move was very hard on his parents and they would travel to Redfield every two weeks to visit Richard. When changes were made at the state hospital he was moved to a group care home in Watertown. Illness later forced him to move to the Golden Living Center in Ipswich, SD. This move proved to be a blessing for him as his two brothers and their wives live in Ipswich and could visit him often. His brother Jerry became his legal guardian when both of his parents passed away.

Richard loved to have visitors but would wave goodbye when he was ready for you to leave. He liked watching cartoons on TV and cherished his stuffed animals. He took great pride in his appearance and always wanted to look nice. He would ask all his visitors to help him shave. While Richard definitely had his favorite caregivers, he was cared for by many wonderful people over all the years. It takes very special people to take care of someone in Richard's condition and his family is so very grateful for all who were a part of Richard's life.

Blessed for having shared in Richard's life are his sisters, LaVerna Heinz, Mary Jane (Ervin) Wagner, and Charlotte (Jeff) Fischer all of Aberdeen, Phyllis (Bill) Kennedy of Florence, OR, Bernie (John) Roth of Banning, CA, Angie (Val) Harty of Littleton, CO, Shirley (Neal) Hanks of San Ramon, CA and Kay (Bill) Scharf of Ft. Dodge, IA; brothers, Norbert (Vernetta) Jangula and Victor (Lorretta) Jangula all of Ipswich and Jerry (Jane) Jangula of Aberdeen as well as many nieces and nephews.

His parents and one brother, Joey, preceded him in death.

To order memorial trees or send flowers to the family in memory of Richard Jangula, please visit our flower store.