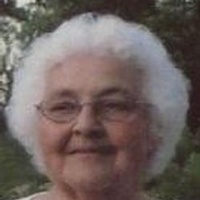 The funeral service for Renetta D. Himmerich, 84, of Roscoe is 1:00 pm Wednesday at St. Paul’s Evangelical Lutheran Church in Roscoe. Burial will follow at Morningside Cemetery.

Visitation is 4-7:00 pm Tuesday at Gramm Funeral Home, 720 N. 6th Street, in Ipswich and one hour prior to the service at the church.
Renetta was born November 14, 1929 on a farm northeast of Roscoe, SD to Fred and Irene (Lutz) Guthmiller. She was raised there and attended country school.

Renetta married Melvin Himmerich on September 14, 1947 at the home of John and Clara Himmerich in Roscoe. They made their first home in Roscoe but would move often in the early years of their marriage. They lived in Brookings, SD while Melvin completed his Engineering degree and then moved to Akron, Ohio and later to St. Mary’s, Ohio. They both wanted to return closer to their roots in South Dakota and they moved to Circle Pines, MN in 1956. Three years later they moved to Brooklyn Center, MN, where they raised their blossoming family.

While in Brooklyn Center, Renetta was an active member of the Lutheran Church of the Triune God, where she helped with the ladies aide and shared her beautiful alto voice in the church choir.

In 1986 the couple returned to Roscoe, SD where she took an active role in the community organizing blood drives, helping with the Roscoe Commercial Club and as a member of the American Legion Auxiliary. She also was an active member of St. Paul’s Lutheran Church in Roscoe, where she had been baptized and confirmed in her youth.

Renetta was an avid seamstress and custom made many clothes including wedding dresses for her daughters. She enjoyed cooking, puzzles, gardening and most of all being a grandma.

She was preceded in death by her parents; an infant daughter, Gayle Ann; grandson, Jeremy Himmerich; siblings, Gordon and a brother in infancy.

To order memorial trees or send flowers to the family in memory of Renetta Himmerich, please visit our flower store.