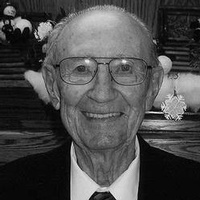 Reinhold "Reiny" Eisenbeisz was born on February 16, 1922 in Bowdle, South Dakota
the son of David & Christina Eisenbeisz. Reiny graduated from Bowdle High School
in 1941. He worked for the Bank of America from 1941 to1943 in Stockton, California.
Reiny served in the Army from 1943-1946 and was stationed in China, India and Burma.
He married Ruth Winkler on April 21, 1946.

Reiny retired in 1978 after 30 years with Government Services. His last position was
Comptroller at the Naval Air Station in Seattle.

Reiny passed away on Friday, October 3, 2014 at the age of 92. He was preceded in death by his parents, his wife Ruth, his two brothers Arthur and Albert and his sister Martha.
Per the family's wishes, a private burial will be held at St. John's Lutheran Cemetery in Bowdle, South Dakota.

To order memorial trees or send flowers to the family in memory of Reinhold Eisenbeisz, please visit our flower store.