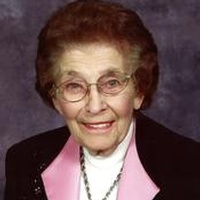 The funeral service for Naomi Hieb, 93, is 2:30 pm Sunday, March 17 at St. John's Lutheran Church in Hosmer. Burial will be in Bethany Cemetery.

Naomi was born to Gustave and Elenora Ulmer on January 2, 1920 near Hosmer, SD. She attended country school.

She married Arnold Hieb in 1939 and they started their lives together on a farm north of Hosmer where they raised their five children and farmed for over 50 years. After Arnold's passing in 1990, she remained on the farm until 1996 after which time she moved to her house in Hosmer and remained there until 2011.

Naomi was an active member of St. John's Lutheran church, especially in their quilting program which sends quilts to the Lutheran World Relief Program. She was such a talented quilter and her handiwork is in the homes of many people.

She enjoyed traveling, shopping and was a collector of things that brought her joy. She was devoted to her children and grandchildren and her love and support will be sorely missed.

Naomi departed this life on earth on March 6, 2013 at Avera St. Luke's Hospital in Aberdeen, after a brief illness.

She is survived by her five children, Stanley Hieb of Aberdeen, Phyllis (Chuck) Haerter of Lake Havasu, AZ, Patty (Dennis) Hollan of Hosmer, Karen (Keith) Ballweg of Belvidere, Illinois and Kenny (Fran) Hieb of Hosmer, as well as her brother Kermit Ulmer of Oakes, ND and sister Erna Sonnenfeld of Des Moines, WA. She has nine grandchildren and 13 great grandchildren.

She was preceded in death by her parents, her husband Arnold, brother Willard Ulmer and sister Viola Weishaar.

To order memorial trees or send flowers to the family in memory of Naomi Hieb, please visit our flower store.