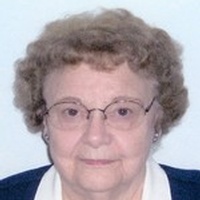 Liturgical Wake is 6:00 pm Wednesday at the church with visitation starting at 4:00 pm. Visitation continues one hour prior to Thursday's Mass.

Minnie was born June 19, 1923 to Antone and Mary (Kraft) Vetch in Glenn Township near Roscoe, SD. She attended school in Roscoe.

She married Clemens Geier on May 27, 1941 at St. Thomas The Apostle Catholic Church in Roscoe. A short year later, Clemens was called to duty in WWII. She spent the next 4 and a half years living with his parents and raising their first daughter, Darlene.

Upon his return they farmed southwest of Roscoe. She helped with everything on the farm and worked hard as their family grew over the years with five more children joining the family. She was an excellent cook and enjoyed baking. In the little free time she had, she enjoyed embroidery work in her younger years. She found enjoyment in playing cards and dancing to polka music. Clemens died on December 7, 1994, however, Minnie continued to live on the farm up until the last five years of her life which was spent in care facilities.

Minnie was very proud of being a member of St. Thomas The Apostle Catholic Church where she had also served on the Altar Society. She was baptized, confirmed, married and according to her wishes will be buried through St. Thomas.

Grateful for having had Minnie in their lives are her children, Darlene Furhmann of Billings, MT, Mary (Richard) Dabbert of Vacaville, CA, Theresa (Robert) Malsam of Roscoe, Clemens (Bonnie) Geier of Rapid City, Leo Geier of Hardin, MT, and Andrew (Diann) Geier of Glendale, AZ; one brother, Morris Vetch of Rapid City; fifteen grandchildren, 25 great-grandchildren and one great-great-granddaughter.

Her parents, husband, one granddaughter, Debbie Fuhrmann and sisters, Agnes Meier and Delores Kallenberger preceded her in death.

To order memorial trees or send flowers to the family in memory of Minnie Geier, please visit our flower store.