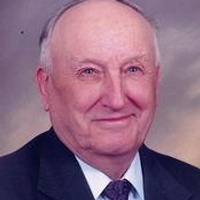 The funeral service for Milbert Pfeifle, 91, of Leola, is 10:30 AM Friday at St. James Lutheran Church in Leola. Burial with Military Honors will follow at Greenmound Cemetery in Leola.

Visitation will be from 6-8:00 pm Thursday at Gramm Funeral Home, 720 N. 6th Street, in Ipswich and one hour prior to services at the church on Friday.

Milbert was born August 27, 1922 to Adam and Rose (Jundt) Pfeifle at Eureka, SD. He was raised on the family farm southwest of Leola. He attended country school and continued to help his family on the farm.

He entered the U.S. Marine Corps on December 2, 1942. Milbert was proud of serving his country and upon his honorable discharge he returned to the farm and immediately joined the American Legion Post 78. He was honored with a lifetime membership in the American Legion.

He married Lorina Stoecker on March 14, 1954. They made their home on Milbert's family farm. Together, they worked the land and raised livestock until 1990 when they retired. Milbert loved the quiet rural life. They lived on the farm for another five years before moving into Leola. Lorina died in 2009.

Milbert was a lifetime active member of St. James Lutheran Church in Leola. He had also been active in the McPherson County Republican Party for many years. He took an active passionate role in the betterment of Leola's Senior Citizens. He worked tirelessly to see to it that the Leola Senior Meal program could stay viable.

Milbert died Sunday, October 27, 2013 at Manorcare Health Services in Aberdeen.
He is survived by brother-in-law, Loven (Shirley) Stoecker of Onaka; sisters-in-law, Lu (Richard) VanBeek of Aberdeen and Leona (Derald) Kern of Faulkton; and many nieces and nephews.

His parents; wife, Lorina; and sister and brother-in-law, Margaret and Helmuth Adam preceded him in death.

To order memorial trees or send flowers to the family in memory of Milbert Pfeifle, please visit our flower store.