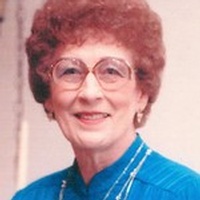 She married Joseph Uhrich at Onaka on June 27, 1932. They made their home on a farm south of Roscoe until moving to Aberdeen in 1956. In Aberdeen, she worked as a seamstress for several different companies. Mary continued to live and work in Aberdeen following Joseph's death in 1981. She retired from Aberdeen Interiors in 1992 at the age of 80.

In the fall of 2001, Mary moved to the Westwood Assisted Living Center in Roscoe. She spent the last three years living at the Hosmer Senior Citizen's Home.

Mary was thoughtful and kind to her family and friends. She never missed an opportunity to send birthday greetings and gifts. She shared her sewing and crocheting creations with all of her family.

She enjoyed visiting with others and if a game of Bridge or Pinochle could be found she would be a part of it. Over the years, Mary was member of several Bridge Clubs. She also loved gardening and flowers. She was very proud of receiving the yard of the week award years back in Aberdeen.

To order memorial trees or send flowers to the family in memory of Mary Uhrich, please visit our flower store.