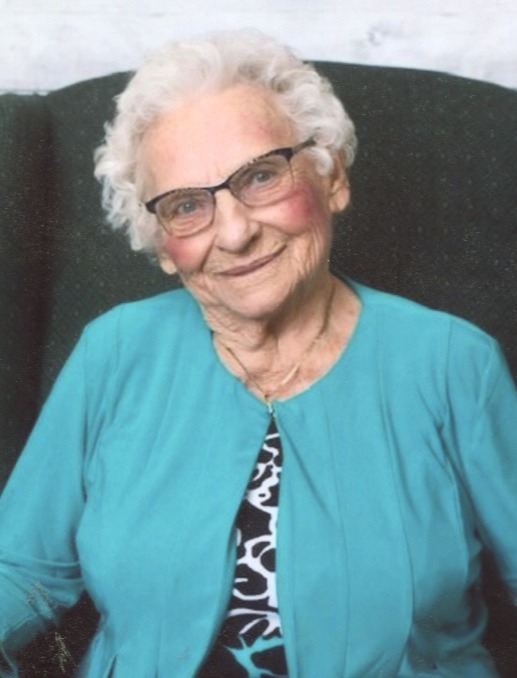 Lorraine Reidt died peacefully in her sleep at Bethesda Aberdeen on June 1, 2022. Viewing will be held on Sunday, June 5 at Leonard Gramm Funeral Home in Ipswich from 5-7pm with a prayer service at 7pm.

Her funeral will be held alongside a memorial service for her husband Verne Reidt at St. Paul’s Lutheran Church in Roscoe, SD on Monday, June 6 at 2pm. Officiant is Pastor D.Thomas Rawerts. Lorraine’s interment will follow at Morningside Cemetery with Military Honors for Verne being provided by Roscoe American Legion Post #259. Luncheon will follow at the Legion Hall in Roscoe.

Lorraine was born to Gottlieb and Martha (Kirschenmann) Wiedrich on April 7, 1934 at their farm in Edmunds County. She was the youngest of eight children and attended school in Roscoe where she participated in band and choir, graduating in 1952. She worked in Mitchell after graduation, becoming engaged to her long time beau Verne Reidt when he was home on leave from the army. They were married on February 8, 1953 at St. James Congregational Church in Roscoe. The couple made their first home in New Jersey and often told the story of how Lorraine used a broom to kick out the pigeons prior to moving into their apartment. Verne was honorably discharged from the army and they moved back to South Dakota to start a family. Verne and Lorraine took over the family farm in 1956, growing crops and raising a variety of animals over the years including: chickens, pigs, dairy cattle, beef cattle, and at one point 500 geese. They moved to the town of Roscoe in 1986.

Lorraine was very active in the community, participating in and leading a variety of organizations including: St. Paul’s Ladies Aide, 4H, Commercial Club, American Legion Auxiliary and was a much sought after secret grandmother for the girls in FHA. Her door was always open as was her never ending candy drawer. She was generous with her time and made friends wherever she went, always ready to lend a listening ear. One could say she was a lifelong Homecoming Queen. After all, she was crowned homecoming queen in high school then reigned as Avantara Senior Snow Queen in 2020. When Lorraine wasn’t cooking and baking for her friends and family, she enjoyed creating with stained glass, listening to music, planting flowers, watching birds, and decorating for each holiday. She worked very hard on the farm and later did bookkeeping. She was incredibly proud of Roscoe and enjoyed her 18 year role as the Mayor’s wife.

Life changed when Verne moved into the nursing home. Lorraine visited him regularly, even driving 180 miles round trip to spend time together. Lorraine moved into the nursing home herself and they were able to again live under the same roof for five months before Verne passed away on May 19, 2020. Lorraine continued to enjoy her family and friends, attending as many events as possible. She particularly enjoyed watching her great-grandsons’ events. Whenever the subject of her stature came up she would respond “Dynamite comes in small packages!”

To order memorial trees or send flowers to the family in memory of Lorraine Reidt, please visit our flower store.