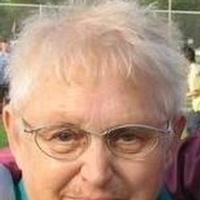 The funeral service for Leona Rosa Morrison, 83, of Leola, is 11:00 AM Friday, April 3, 2015 at St. James Lutheran Church in Leola, SD. Burial will be in Green Mound Cemetery.

Visitation is 5-7:00 pm Thursday at Schriver's Memorial Mortuary in Aberdeen and one hour prior to the service at the church in Leola on Friday.

Leona was born November 8, 1931 to Philip and Emelia "Katy" (Geist) Werre on a farm near Roscoe, SD. She was raised on the farm and was baptized and confirmed at St. Paul Evangelical Lutheran church in Roscoe. She attended Roscoe Public School and following graduation she enrolled at Northern State College in Aberdeen. She attained her Associates Degree in Education and later added a Bachelor's Degree.

Leona's first teaching job led her to Leola where she would meet Bruce William Morrison. They were married on August 26, 1955 at St. Paul Evangelical Lutheran Church in Roscoe. They made their home in Leola where she and Bruce ran a Sand and Gravel Business and operated the school bus service. They also raised three daughters and a son.


Bruce and Leona also had a small sheep operation. Leona found great peace out in the country with the sheep, in the gravel pit and at the clothes line. She enjoyed the quietness of the South Dakota prairie. Leona continued to run the family business while raising her family after Bruce died in 1976.

Leona taught in the Leola area including a one room school house for a period of time. She loved her students and helping them to grow in this world. She also found time to be a 4-H Leader for the youth of the Leola area. After retiring from 28 years of teaching, she attended most of her Grandchildren's events, travelling many miles to go to them.

Leona was a past Worthy Matron of the Order of Eastern Star, a member of the American Legion Auxiliary, Sunday School teacher at St. James Lutheran Church, and a past member of SDEA.

Thankful for having shared in her life are her children, Philip (Carmen) Morrison of Aberdeen, SD, Patricia (Eric) Christianson of Northfield, MN, Beverly (Jeff) Feist of Bismarck, ND and Kristie Morrison of Leola; two sisters, Phyllis (Calvin) Huber of Huron, SD and Janice Schock of Bowdle, SD; and many nieces and nephews.

She was preceded in death by her parents, husband, one sister, Mildred Walth and many aunts and uncles.

Funeral arrangements are with Gramm Funeral Home of Ipswich. grammfuneralhome.com

To order memorial trees or send flowers to the family in memory of Leona Morrison, please visit our flower store.