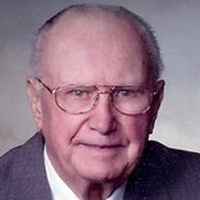 Mass of Christian Burial for Lawrence Engelhardt, 92, of Ipswich, SD is 10:30 a.m. Thursday at Holy Cross Catholic Church in Ipswich with Fr. Randy Phillips, Celebrant. Burial will follow in the church cemetery.

A Liturgical Wake and Rosary is 5:30 p.m. Wednesday at Holy Cross.

Visitation is 1-4:00 p.m. Wednesday at Gramm Funeral Home in Ipswich and one hour prior to the service at the church.

Lawrence was born March 24, 1917 to Henry and Magdalena (Adler) Engelhardt in Karlshrue, ND. The family moved to a farm near Ipswich, where he attended Holy Cross School for eight years. He started high school but quit to help on the family farm.

He married Grace Hawkins on August 11, 1938. They made their home in Aberdeen for several years while he worked at K.O. Lee Company and later for the Aberdeen American News. They returned to Ipswich and built their own home. He worked for a short time at Lux Candle Co. and then went to work for Ipswich Co-op for thirty years as a transport driver and later drove a fuel and gas delivery truck.

After retiring, he and Grace enjoyed traveling and spent twenty winters in Arizona. During his lifetime he enjoyed fishing, hunting, golfing and bowling. He enjoyed working in his yard. His main hobby was doing woodwork and he spent many hours in his shop making things for his wife, home, children, grandchildren and friends. He once said, "If it's made from wood, I can make it," and he did.

He was a member of Holy Cross Catholic Church and an auxiliary member of Legion of Mary.

To order memorial trees or send flowers to the family in memory of Lawrence Engelhardt, please visit our flower store.