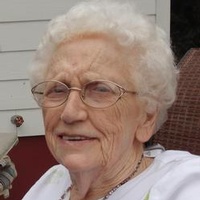 The funeral service for LaVonne Olson, 91, of Ipswich, is 11:00 AM Monday, April 4, 2016 at Richland Wesleyan Church south of Mina, SD. Rev. Ron Wickard will lead the worship service. Burial will be at Riverside Memorial Cemetery in Aberdeen.

Memorials are preferred to the Salvation Army.

LaVonne was born November 29, 1924 to Fred and Nellie (Holm) Oas in Montevideo, MN. The family later moved to Aberdeen, SD where she attended school and graduated from Aberdeen Central High School.

On July 19, 1942 she married Harvey Robert Olson and together they raised seven children on their farm southeast of Ipswich, SD.

LaVonne was a hard working farm wife who loved gardening, dancing, preparing many huge meals for family and friends and was known for her famous "Cookie Bucket." Over the years she loved watching her grandchildren participate in sports and followed the Ipswich Tigers, Northern State Wolves and was an avid Minnesota Twins fan.

She was a woman of strong faith in her Lord and Savior Jesus Christ which she lived out on a daily basis. This Faith, strengthened by a strong devotion to the Richland Wesleyan Church, sustained her through many trials and losses during her life. She also was thankful for and fully supported the efforts of the Salvation Army.

LaVonne peacefully passed to her heavenly home on Thursday, March 31, 2016 at Bethesda Home in Aberdeen.

LaVonne's family extends their heartfelt thank you to the entire staff of Bethesda Home for their outstanding care and love shared with Lavonne.

To order memorial trees or send flowers to the family in memory of LaVonne Olson, please visit our flower store.