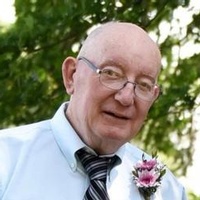 Mass of Christian Burial for Larry Flaherty, 76, long time Ipswich businessman, is 2:00 PM Monday at Holy Cross Catholic Church in Ipswich. Fr. Russell Homic will serve as Celebrant of the Mass. Interment of cremains will be at a later date.

There will be no visitation. The family prefers memorials in lieu of flowers.

Larry Dale Flaherty was born July 2, 1939 in Pampa, TX to Lawrence and Mary (Haiduk) Flaherty. He graduated from Pampa High School in 1957. He attended Texas A&M and graduated with a Bachelor's degree in range management in 1961. He enlisted in the Texas National Guard with 6 months of active duty in Fort Polk, LA. Upon completion of active duty he accepted a position with the Bureau of Indian Affairs working on the Rosebud, Cheyenne and Pine Ridge Reservations as a range manager and soil conservationist.

He married Dixie Irvin in April of 1964. In 1990 he married Linda Ogdahl. In 1969 Larry purchased the Coast to Coast Hardware Store in Ipswich, SD and sold the store in May of 2004.

During his time in Ipswich he was active with the Ipswich Commercial Club and the Ipswich Development Corporation. He was also a member and past president of the Ipswich Jaycees. Larry was a member of the Army Enlisted Reserve and the SD National Guard. He was honorably discharged from the guard in 1968. He was proud to have been a 50 year member of the American Legion.

Larry had many hobbies which included gardening, restoring old cars and maybe once in a while taking a chance on a slot machine or two.

He loved working with his many customers over the years. Retirement from the store was difficult for him so he worked part time as a dispatcher for the Edmunds County Sheriff's Department.

Larry died Wednesday, September 9, 2015 at Avera St. Luke's Hospital in Aberdeen. His wishes were to be cremated.

He was preceded in death by his parents.

His funeral arrangements are with Gramm Funeral Home of Ipswich. grammfuneralhome.com

To order memorial trees or send flowers to the family in memory of Larry Flaherty, please visit our flower store.