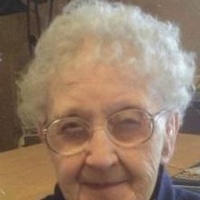 The funeral for Kathryn A. Fox, 94 of Ipswich, and formerly of Aberdeen and Watertown, is 10:00 AM Tuesday at Gramm Funeral Home in Ipswich. Fr. Russell Homic will lead the service. Burial will be at 1:30 pm Tuesday at St. Mary's Cemetery in Watertown.

Visitation is one hour prior to the service at the funeral home on Tuesday.

Kathryn was born November 26, 1919 at Kranzburg, SD to Gabriel and Agnes (Lippert) Fox. She was raised on the family farm and attended school at Kranzburg.

She moved to Aberdeen, SD, with her sister, Cecelia Goodman, and later to the Golden Living Center in Ipswich, SD.

Kathryn was known for her sweet tooth and she enjoyed baking, embroidery and loved cats. Her devotion to her religion was of utmost importance as she would pray the rosary daily.

Her parents and sister, Cecelia preceded her in death.
Kathryn died Friday, August 29, 2014 at Golden Living Center in Ipswich.

To order memorial trees or send flowers to the family in memory of Kathryn Fox, please visit our flower store.