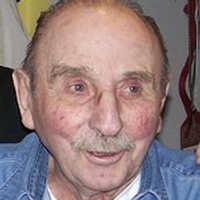 Mass of Christian Burial for Jerome L. Blank, 88, of Sioux Falls and formerly Ipswich, is 10:00 a.m. Saturday, February 14, 2009 at Holy Cross Catholic Church in Ipswich. Fr. Randy Phillips will serve as Celebrant of the Mass. Burial follows in the church cemetery.

Liturgical Wake Service is 5:30 p.m. Friday at Holy Cross Catholic Church with visitation starting at 4:00 p.m. at the church.

The son of well-known auctioneer Carl R. Blank and Kate Kessler Blank, Jerome was born and raised on the South Dakota prairie.

Jerome is preceded in death by his eldest son, Lancing Jerome Blank, who died in 1996, and his great grandson, River, who died on March 8, 2008.

Jerome entered the Air Force in 1942 and became a radio operator, gunner, co-pilot, and navigator, flying on a B24 Liberator bomber as a member of 456th bombardment group, during World War II. He was decorated during his missions with the Air Medal with one olive leaf cluster, the European - African - Middle Eastern Theater Ribbon with two battle stars, and the Good Conduct Medal. He was discharged in 1945 and returned to the prairie and Grace.

Until 1962 he worked as a mechanic, sold crop insurance, built grain bins and worked at numerous other jobs to support his growing family.

He bought the family farm in 1962. His love of the land led him to grow wheat and raise cattle until retirement. He treated the land with respect and was proud that some of the farm was prairie that had never seen the plow. One of his last requests was that 160 acres of virgin prairie land be protected in perpetuity through an easement with the federal government.

Jerome enjoyed hunting pheasants and fishing occasionally with family and friends. He was an avid reader and particularly fond of the work of Louis L'Amour.

To order memorial trees or send flowers to the family in memory of Jerome Blank, please visit our flower store.