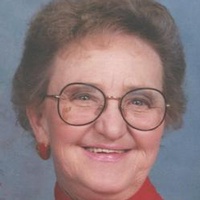 Mass of Christian Burial for Janice L. Heinz, 79, of Ipswich is 2:00 pm Friday at Holy Cross Catholic Church in Ipswich. Burial will be at Holy Cross Cemetery following the Mass.

Visitation starts at 5:00 pm Thursday at the church with a Liturgical Wake Service beginning at 7:00 pm.

Janice Leatrice (Klein) Heinz, was born March 9, 1937 to John B. and Carolyn (Beyerle) Klein in Mobridge SD. She attended grade school in Mound City until 5th grade and then attended Mobridge Public School from the 6th grade until her graduation. Following graduation, Janice enrolled in Northern Normal School where she would earn her teaching certificate.

On May 7, 1960 Janice was united in marriage with Francis L. Heinz and the couple moved to Ipswich where they bought a house and raised their two boys, Doug and Mike. Playing ball in the backyard with the boys and their neighborhood friends was a nightly occurrence with Janice baking cookies for all to eat.

Janice taught school at the Rosette Hutterite Colony for 16 years where she developed life-long friendships with the men and women from the colony.

After retiring from the teaching field, Janice became an avid Tupperware dealer. She would graduate from salesperson to manager and earned her own vehicles through Tupperware. Janice worked at this job for approximately 13 years until Francis's health took a turn for the worse, and she had to stay home and care for him.


When Francis passed away, Janice started her new career at Lux Candle Co., Inc. working alongside her two sons. She continued to work at Lux Candle until her health would no longer allow her to.


Janice was blessed with 4 grandchildren who quickly became the center of her attention. She would attend their pageants, sports events, academic events, music concerts and was very proud of all their accomplishments. Janice was awarded a trophy from one of the teams for being the #1 Fan.

In December 2011, Janice became a resident of the Golden Living Center in Ipswich. Being a resident, did not stop her from continuing to follow her grandchildren's endeavors. Up until her passing, Janice was wanting to "get out of the home" and watch them compete. If you forgot to pick her up, you knew there was a not-so pleasant conversation coming your way. Now, she has the "Best Seat in the House".

Surrounded by her loving sons, daughter-in-laws and precious grandchildren, Janice peacefully passed away Friday, Aug. 5, 2016 at the Sanford Medical Center in Aberdeen, SD at the age of 79.


Grateful for having shared her life are Doug (Lynette) Heinz, Ipswich and Mike (June) Heinz, Ipswich, and four grandchildren, Brandi, Carter, Kamryn and Halle; and many cousins, nieces and nephews.


Janice was preceded in death by her parents, husband Francis Heinz and two brothers, Wayne Klein and Vern Klein.

To order memorial trees or send flowers to the family in memory of Janice Heinz, please visit our flower store.