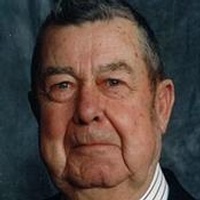 The funeral service for Harvey Olson, 93, of Ipswich, is 11:00 am Tuesday at Richland Wesleyan Church, rural Mina, where Harvey was one the first children to be baptized. Rev. Ron Wickard will lead the worship. Burial will be at Riverside Cemetery in Aberdeen.

Visitation is 5-7:00 pm Monday at Gramm Funeral Home in Ipswich and for one hour prior to the service at the church on Tuesday.

Harvey was born in Aberdeen, SD on October 11, 1919 to Robert and Minnie (Rohr) Olson. He was raised on the farm that his grandfather had homesteaded east of Ipswich, SD. Harvey attended Union Township country school and then Mina High School before continuing the family's work on the farm.

Harvey married LaVonne Oas on July 19, 1942. They made their home on the Olson farm. Harvey proudly continued farming with his brother on the homestead. He and LaVonne raised their seven children on the farm. Besides all the farm work and his active relationship with his children, he also gave back to his community with a sense of pride. He had served on many area civic and service boards and committees. Most notably, Harvey served on the Edmunds County Commission and had also served as a Magistrate in Edmunds County.

While his passion was farming, he had a keen interest in law enforcement and was proud that all of his sons had worked in law enforcement. Harvey found joy in turning his farm over to his sons in the late 1970's so that the family farming tradition could be carried on.

While maintaining a watchful eye on the farm, he also enjoyed hunting and fishing, and any other activity that brought family and friends together. He and LaVonne kept an open door to any and all who wanted to stop by and serving an extra meal was never a burden to either of them.

Harvey had experienced many life tragedies with the loss of children and grandchildren, but he remained focused on life and graciously, with a kind heart and gentle way and LaVonne at his side, inspired those around him to love one another first. His joy in life was really found in love for family and friends not in worldly possessions. With a smile and chuckle, Harvey left this world and those who knew him just a little bit better.

Harvey died Friday, July 19, 2013, the day of his 71st wedding anniversary, at Sanford Hospital In Aberdeen.

His parents; children, Richard, Peggy, Patricia and Nancy; granddaughters, Tammy and Jennifer: and great-granddaughter, Kayla, preceded him in death.

To order memorial trees or send flowers to the family in memory of Harvey Olson, please visit our flower store.