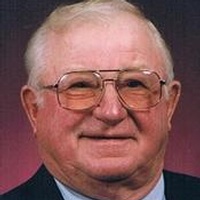 The funeral service for Harold "Red" Haux, 79, of Leola, is 2:00 p.m. Tuesday at St. James Lutheran Church in Leola with Rev. Henschen, officiating.

Visitation is 4:30-7:00 pm Monday at St. Paul Lutheran Church, Main Street, Leola and one hour prior to the service at St. James Lutheran.

Memorials preferred in lieu of flowers.

Harold was born on June 23, 1931 at Forbes, ND to Gottlieb and Ida (Heupel) Haux. He was raised on farms in the Forbes area and attended country schools and Forbes High School.

As a young adult he worked for various farmers around Forbes.

Harold and Verniece Treichel were united in marriage on April 12, 1953. They made their first home in Myranda, SD before moving to Stratford, SD where he worked for the Stratford Elevator. Harold eventually attended Auto Body School in Fargo, ND. Following his training they moved to Leola, SD where he worked as a technician for Rueb Chevrolet and the Leola Elevator.

Harold embarked on a 33 year long career as a law enforcement officer in Leola by attending the South Dakota Police Training Academy. During his many years of service he served as the Leola City Chief of Police and also as a McPherson County Deputy Sheriff. While serving as the local lawman he also worked as the city's maintenance supervisor. He took his role of officer very seriously and would answer to the call of duty at any hour until the time of his retirement on July 1, 1996.

His commitment to the citizens of Leola didn't stop him from being a caring husband and father at home. Although he had to miss some of his family's activities he found time to be with them every day as they were his pride and joy. He loved to go hunting, fishing and snowmobiling with his family.

He always strived to make Leola a better place to live for everyone. He took part in many different service clubs and organizations. He was an active Sportsman's Club promoter and a member of the Leola Volunteer Fire Department. Harold passed along his love for hunting and safety to many youngsters in the area by teaching Hunters Safety courses.

Harold's wonderful sense of humor is remembered by many. He had the ability to find humor in many of the daily grinds of life.
He was member of St. Paul's Lutheran Church in Leola and had served his church family as his own.

His parents, son, Jeffrey, sister Virginia and brother, Jim preceded him in death.

To order memorial trees or send flowers to the family in memory of Harold Haux, please visit our flower store.