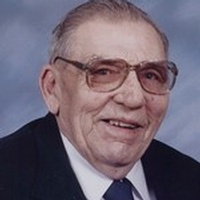 Mass of Christian Burial for Frank D. Braun, 89, of Ipswich is 10:30 a.m. Tuesday at Holy Cross Catholic Church in Ipswich. Interment follows in the church cemetery.

Liturgical Wake Service and Rosary is 7:00 p.m. Monday at the church with visitation from 2-5:00 p.m. at Gramm Funeral Home in Ipswich and one hour prior to the services at church.

Frank Daniel Braun was born February 19, 1920 in Fountain Township, near Ipswich, SD to Andrew and Lucy (Lacher) Braun. He was raised on the family farm and attended rural school. Frank eventually boarded at and attended Holy Cross Catholic School in Ipswich.

He continued to work on the farm before being drafted into the U.S. Army where he was a part of the squad that liberated the Dachau Concentration Camp. He witnessed great horror during his tour of duty and didn't talk about those images very often. However, he was very proud of the service he provided to his country and to those affected by Hitler's regime.

While in the service he maintained contact with the love of his life, Armella Geffre of Leola. In fact, he sent engagement rings home to her from Europe.
They eventually married in a ceremony at Leola on June 12, 1947.

They made their first home on Frank's family farm. Over the years they lived in different houses on the farm and then built a home while their children were young.

Frank was proud of the dairy and farming operation that he ran. His herd of Holsteins was a great source of pride for him. He was also honored in that his children still farm his land.

Frank and Armella moved to Ipswich in the fall of 1986 where they continued to make their home until the time of Frank's death on Friday, June 5, 2009 at his residence.

He was a member of Holy Cross Catholic Church, the Catholic Order of Foresters, American Legion, and was a past officer and supervisor in Fountain Township.

His parents, two sisters, Minnie Rappe and Kathryn Lahr, and three brothers, Richard, Joseph and Daniel preceded him in death.

To order memorial trees or send flowers to the family in memory of Frank Braun, please visit our flower store.