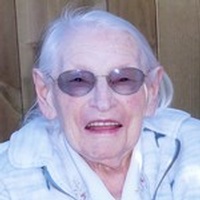 The funeral service for Esther Schill, 95, of Pierre and formerly Leola, is 10:00 a.m. Friday at St. James Lutheran Church in Leola with Rev. Lloyd Miller leading the service. Interment will follow at Green Mound Cemetery.

Visitation is 6-7:30 p.m. Thursday at Gramm Funeral Home in Ipswich and one hour prior to the service at the church.

Esther was born to Jacob and Katherina (Reich) Mund on November 21, 1912. She married Oscar Schill November 6, 1935 in Aberdeen, SD. They farmed in ND for a time and in 1949 they moved to the Leola area. In 1965 they moved into Leola. She moved to Pierre in 1998 and for the last six years has been a resident at the Golden Living Center.
Esther's whole life revolved around her family, husband, children, grandchildren and great-grandchildren. Her greatest faith was her faith in God and her church, St. James Lutheran in Leola, SD. Esther's caring and compassionate heart touched the lives of many people including those in her family, the staff at Golden Living Center, and also the children she spent countless years babysitting for. Her love for hugs and kisses, and her German lullabies and prayers will be greatly missed by all.
She is survived by her six children: Fern Bauer of Gilberts, IL, June (Marvin) Diede of So. Elgin, IL, Tina (Bob) Stallman of Spokane Valley, WA, Howard (Gladys) Schill of Pierre, SD, Linda (Ray) Elenbaum of Pierre, SD, and Violet (Curtis) Veil of McCalla, AL; eleven grandchildren: Penny Bauer, Cindy Bauer, Terry (Marilyn) Diede, Timmy (Eileen) Diede, Tamie (Vince) Sottero, Christie (Vern) Sevier, Kurt Schill, Susan (Jim) Jensen, Kathy (Jeff) Arnold, Sheri (Ryan) Doolittle, and Greg (Akiko) Veil: three step grandchildren Stephanie (Aldo) Schuman, Lindsay (Aaron) Scicluna, and Janna (David) Theriault: 15 great-grandchildren and 3 step great- grandchildren.

To order memorial trees or send flowers to the family in memory of Esther Schill, please visit our flower store.