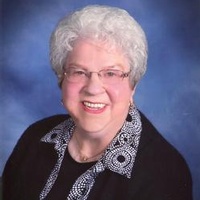 
A Liturgical Wake Service will be held at 7:00 PM Tuesday at the church. There will be no visitation.


Esther was born January 19, 1932 at Ipswich, SD to Joseph A. and Frances T. (Gorman) Koehly. She was raised on a family farm and attended Holy Cross Catholic Elementary School in Ipswich. She furthered her education by graduating from Ipswich High School.


After high school Esther worked as a waitress at the Downtown Café in Ipswich and eventually went to work as a secretary/bookkeeper at FEM Electric in Ipswich. While working at FEM she caught the eye of Sylvester "Bud" G. Fischer. The two were married on June 10, 1952 at Holy Cross.


They made their home in Ipswich as Bud continued at FEM and they raised a family of three boys. As the boys grew older, Esther rejoined the workforce as a bookkeeper at the Farmers CO-OP. She continued to work until the 1980's when she retired.


Esther was a faithful member of Holy Cross Catholic Church where she had been active in the Altar Society. She loved time spent with her children and grandchildren. Esther cherished travels with her friend Joy to Watertown to meet her friend Bernie who had moved away, where they would play at the casino but remain ever mindful of the budget. She also spent hours on craft work and could often be found helping many to wallpaper in their homes.


Thankful for having shared in her life are her boys, Don (Deb) Fischer of Grand Forks, ND, Tom (Cindy) Fischer of Bismarck, ND and Mark (Colleen) Fischer of Aberdeen; 7 grandchildren and 8 great-grandchildren.


Her parents, husband, 4 brothers and 5 sisters preceded her in death.

To order memorial trees or send flowers to the family in memory of Esther Fischer, please visit our flower store.