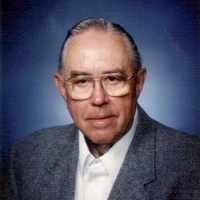 Mass of Christian burial for Emmett H. Johnson, 88, of Roscoe, SD, is 10:30 AM Wednesday at St. Thomas the Apostle Catholic Church in Roscoe with Fr. Russel Homic and Fr. DeWayne Kayser serving as Celebrants. Burial at Morningside Cemetery with Military Honors.

Visitation is 5-7:00 pm Tuesday at Gramm Funeral Home in Ipswich. There will be no Prayer Service.

In lieu of flowers, the family requests memorial donations in Emmett's name to be given to St. Thomas the Apostle Catholic Church, Roscoe, SD or the American Heart Association.

Emmett Hardy Johnson was born in 1926 in Bemidji, MN to Albin and Olive Johnson. He attended school in Larimore, ND where he enjoyed participating in basketball, football and band. He was drafted into the United States Army during the closing days of World War II. After the conclusion of the war he was assigned as a clerk in the army of occupation in Tokyo where he served for six months.

In 1956, Emmett moved to Roscoe, SD to work with his father Albin in First State Bank of Roscoe. He held several positions in the bank including Cashier, Vice President, and finally President. He retired from the bank in 1990. While in Roscoe, he was an active participant in St Thomas the Apostle Catholic Church, the Roscoe American Legion, the Roscoe Fire Department, and the South Dakota Banker's Association. He also enjoyed golfing, fishing, and supporting his children's sports and activities. He did all of those with his fun-loving sense of humor.

After retiring from the bank, he became a nomad and rotated where he lived between Roscoe, Larimore, and Harlingen, TX. In 2011, he moved to Rochester, MN.

He was preceded in death by his wife Terry, his parents Albin and Olive, his daughter-in-law Paula, and his granddaughter Sarah. He was a wonderful father, grandfather, great-grandfather, and friend. He will be missed by all.

To order memorial trees or send flowers to the family in memory of Emmett Johnson, please visit our flower store.