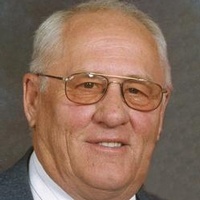 The funeral for Elmer J. Fauth, 85, of Hosmer, is 10:30 AM Friday at St. John's Lutheran Church in Hosmer. Burial of his cremated remains will follow at Bethany Cemetery with military honors.

Visitation begins at 5:00 PM Thursday until a prayer service at 7:00 PM at Gramm Funeral Home in Ipswich.

In Lieu of Flowers a donation to your favorite charity in Elmer's name is appreciated.

Elmer was born February 26, 1930 to Christoph and Rosina (Sandmeier) Fauth in McPherson County, SD. He was raised on a farm and attended country school.

He married Milna Guthmiller on May 23, 1952. Following their marriage he was drafted into the service. They made their home in New York while he served two years during the Korean War. After being honorably discharged from service in 1954, they returned to the Guthmiller family farm northeast of Hosmer. They eventually purchased the farm and operated it until 1977 when they moved into a home that they had hand built in Hosmer.

While in Hosmer he worked for North Central Harvestore, drove over-the-road truck and worked as a city maintenance man until retiring in 1995.

Elmer was an active member of his community by serving on the city council, the school building committee, St. John's Lutheran church council, singing in the church choir, and was active with the American Legion.

He greatly enjoyed wood working and had even built his own casket as well as many pieces of furniture for his children and grandchildren. He liked to hunt, ride and care for horses and was an avid Minnesota Twins fan.

He is preceded in death by his parents, 1 brother and 3 sisters.

Wes Schaible will play the organ and Elmer's granddaughters, Stefanie and Tracie will sing.

To order memorial trees or send flowers to the family in memory of Elmer Fauth, please visit our flower store.