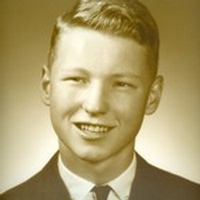 Visitation is one hour prior to the service at the funeral home.

Dennis was born November 21, 1943 at Aberdeen, SD to Harold and Sarah (Jones) Krueger. He attended school in Aberdeen before joining the United States Navy in 1962.

He served his country all over the world in his twenty year career with the Navy. While serving at the Pentagon he met the love of his life, Joy. The two were married in Annapolis, MD on October 17, 1975.

They moved from their home in Arlington, VA when Dennis' career took him to Norfolk, VA. It was there that he worked for the Commander in Chief of the Atlantic Fleet. Dennis retired in 1982.

Childhood memories and a love of hunting and fishing led them to Mina Lake that same year. Their many years on the lake were filled with friends and family, whether it was fishing and hunting with them or just talking for hours on the phone. Dennis also enjoyed working on family genealogy.

He was member of the N.R.A. and Fleet Reserve Association.

Thankful for having shared in the life of Dennis are his wife, Joy; sisters, Debra Fickett of Aberdeen and DeAnn Ochsner of Battle Ground, WA; brothers, Darrell Krueger of Wolsey, SD and Douglas Krueger of Frederick, SD; many nieces and nephews as well as dear friends Gil Haar, Pete Weig, Bill and Mary Cooper, Helen Pace and Joe and Irene Gese.

His parents preceded him in death.

To order memorial trees or send flowers to the family in memory of Dennis Krueger, please visit our flower store.