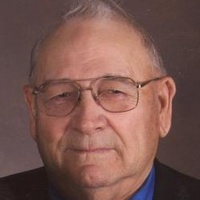 Mass of Christian Burial for Daniel M. "Shorty" Lacher, age 82, of Ipswich, is 11:00 AM Thursday, December 31, 2015 at Holy Cross Catholic Church in Ipswich. Interment will be in the Holy Cross Cemetery

Visitation is 5-7:00 PM Wednesday at Holy Cross with a Liturgical Wake service and Rosary beginning at 7:00 PM.

Daniel "Shorty" Lacher was born in Ipswich, SD, on October 21, 1933, to Joseph D. and Magdalena (Roth) Lacher. He attended farm school and graduated from Ipswich High School in 1951. After graduation, he farmed for four years, and in 1956, was drafted into the U.S Army. While in the Army, he belonged to the Fort Riley Chorus, singing on many tours. On June 14, 1958, he married Jessie Braun, returned to the farm and over the years, had 12 children. While on the farm, he served as the Fountain Township Clerk, Treasurer, and served on the Hospital Board for many years. He was a devoted, lifetime member of Holy Cross Parish and his life was guided by his faith. Shorty was a long time member of the Catholic Order of Foresters along with being a member of the Knights of Columbus. They resided on the farm until his retirement in 1995, at which time they moved to Ipswich.

Shorty had a life-long passion for farming. In his spare time, he enjoyed playing Whist, Pinochle, other card games and trips to the casino. He especially enjoyed spending time with his wife, children, and grandchildren, participating in family celebrations and gatherings. He was a gentle, kind-hearted man who always had a smile on his face and a jolly laugh to go with it. He loved spoiling his grandchildren with candy and lived every day to its fullest.

Shorty passed away on December 28, 2015, after an extended illness, with his family by his side.

Visitation starts at 5:00 PM on Wednesday at the church.

Visitation starts at 5:00 PM on Wednesday at the church.

To order memorial trees or send flowers to the family in memory of Daniel Lacher, please visit our flower store.