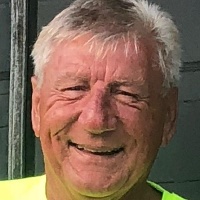 Clarence attended schools in Bowdle, SD, and received his Bachelors and Masters degrees from the Northern State College in Aberdeen, SD. He taught school and coached for several years at Platte, SD, Albin, IA, Fort Morgan, CO and Rapid City, SD. After retiring from teaching, he operated his own business in Longmont, CO.

Clarence was a man of faith. He was baptized at St. John's Luthern Church in Bowdle, SD. He very much enjoyed sports, especially the Nebraska Huskers football team, the Denver Broncos, and the Colorado Rockies. He had a great sense of humor and had an infectious laugh.

A memorial service was held Sunday, June 16, at the Rusty Melon in Erie, Colorado.

To order memorial trees or send flowers to the family in memory of Clarence Stern, please visit our flower store.