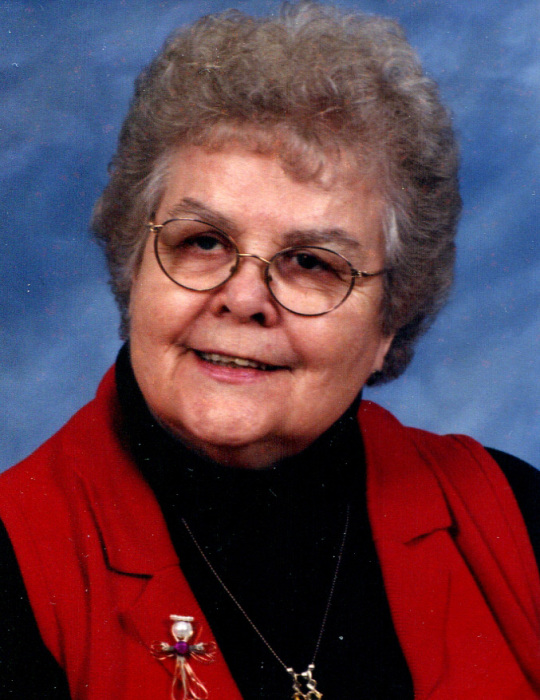 Mass of Christian Burial for Catherine “Katy” Burrer will be held at Saint Thomas the Apostle Catholic Church in Roscoe on Saturday, July 17, 2021 at 10:30 AM followed by coffee and light refreshments.  A Celebration of Life will take place from 4 to 6 PM on that same day at the American Legion Post in Hosmer.  In lieu of flowers, Katy requested that donations be made to American Legion Post #189.

Early in the morning hours of June 6th instant, Catherine (Gisi) Burrer, Katy to family and friends, crossed the river to join her husband, parents, and siblings in eternal rest.  While visiting our mother in the Bowdle Nursing Home in October 2020, the uncomfortable subject of an obituary was broached between mother and son.  Since it was Katy that initiated the discussion, expectations were that she would bless us with a verbal or written draft of what she would like others to read.  It was not to be however, as all she wanted said was that she was the middle child, the 8th, born in Hosmer to Andrew Gisi, Sr. and Carolina (Schoch) Gisi and that she was the last surviving sibling of the 15 children born to that union.

Having now fulfilled our mother’s wishes for her obituary notice, let us tell you Katy’s story from our perspective.

She was born in Hosmer on January 11, 1932.  Her father Andrew Sr. owned, operated, or managed a bar on main street of Hosmer located near Koerner’s Drug Store and Gerhard and Hildegard Bauman’s Appliance Store.  She was born in the upstairs room of that establishment and one of the more recent owners of that since closed establishment, Terry Cox, can enlighten you all on the size of the rooms upstairs and what it must have been like to have a mother, father, and with the arrival of Katy, seven children living in those spaces.  I did mention that our mom was the 8th child but only 7 lived above the bar.  Joseph born in October 1927, died in February 1927.  Having put this hidden fact from Katy’s past in print, we are concerned that she would find it embarrassing that this bit of family history became public knowledge in which case we refer one and all to the opening line of this obituary.

Seven more children were born to the union of Andrew and Carolina, Carrie to her family and friends.  As if life in depression-era South Dakota were not difficult enough, World War II flamed onto the world stage in late 1941 doing nothing more for most local families than to shift the anxiety of how to keep hearth and home together to concern for absent sons and daughters serving abroad.  Such was the case in Katy’s family as elder brothers Ludwig, Louie or Lud to family and friends, and Albert were enlisted into the US Army Air Corps serving in such places as north Africa and the China-Burma-India Theater of Operations.  They would not learn of their father’s untimely death in October 1943 until returning home after demobilization at the conclusion of the war, despite their mother’s letters which the War Department promptly censored or failed to deliver.  It was a searing memory our mother shared with us when as a 11 year old girl she lost her father, and then at 13 two angry young men who had been away at war loudly confronted their mother as to why she had not informed them of their father’s passing.  All was well in the end and were it not for the monthly monetary stipend from their Army pay that Lud and Al sent home, and Carrie’s brother John providing a home in Hosmer for a widow with 13 children, one can only guess what might have happened to the family.  Carrie held the family together, and all her surviving children grew to adulthood.  Most of them finishing high school in Hosmer before launching off into the world to live lives of their own.  Katy graduated with the Hosmer High School Class of 1950.  She was a cheerleader in high school, and after graduation obtained a teaching certificate from Northern State Teachers College in Aberdeen.  Following that, she taught country school northeast of Hosmer about the same time as a returning WWII veteran from Long Lake who had recently graduated from NSTC with a baccalaureate degree in education was hired as a teacher in Hosmer.  Perhaps coincidence that Art Burrer’s cousin also owned a farm northeast of Hosmer and one can only speculate that is how Katy and Art met.  Art was an upstanding Lutheran from Long Lake and Katy a Catholic from Hosmer.  It being the early 50s choices had to be made.  Art became a lifelong Catholic, they were married at Holy Trinity Catholic Church in Hosmer on August 26, 1952, and after a brief honeymoon to the West Coast returned to their teaching duties in Hosmer.  In the years ahead, Katy set aside her teaching career to be a full-time wife and mother, and Art went on to become the Superintendent of Schools in Hosmer.  Art and Katy moved several times during his career in education serving in administrative positions in Selby, Bowdle, Iroquois, Estelline, McLaughlin, Harrold, and finally returning to Hosmer in the late 1970s before Art retired from education in 1982 due to health issues.  During one of those many moves, Katy was hired as the Secretary of the Department of Water and Natural Resources in Pierre and continued to serve in that position for many years spending the week in an apartment in Pierre, and then driving home to Hosmer on weekends before retiring from the position in the early 1990s.

Following Katy’s retirement, and Art’s passing in 1988, the woman who could not sit still for 5 minutes took over managing American Legion Post #189 in Hosmer.  To the amazement of her sons, the teetotaler was now pouring drinks on a bi-weekly basis and that was almost too astonishing to be believed.  Following a health mishap that probably involved a micro-stroke and fall while walking from the Farmers State Bank back to the Legion, Katy took up full-time retirement in the home she loved on Chapman Avenue.  It was from this home that Katy was carried in an ambulance at 6:30 in the morning on New Year’s Eve 2018 to Avera Saint Luke’s in Aberdeen for life-saving surgery to remove a blood clot from her brain due to a stroke.  This second stroke required our mother to need full-time care, and after much resistance she was convinced to take up residence in the Bowdle Nursing Home in March 2019.  Another stroke just a few weeks ago left our mother with a quality of life we would wish on no one, and as much as we mourn her passing, we believe that the reunion with her family was a joyous one and knowing her brothers, our uncles, a boisterous one.

Katy was preceded in death by her parents Andrew Sr. in 1943 and her mother Carolina in 2000.  Also preceding her were (in order of birth):  Ludwig (Louie/Lud), Albert, Otillia (Tillie), Joseph (OCT ‘26 – FEB ’27), Barbara, Leona (Slim), Florence, Agnes, Paul, Frances, Frank, Carolyn, and Andrew Jr. (Andy).  She is survived by her sons Douglas (Dagmar) of New Bern, NC, Patrick of Hosmer, and Gregg (Laurie) of Columbia, SC.  She will be greatly missed by grandchildren Angela of Alexandria, VA, Meaghan (Tyler) of Canon City, CO, Hannah of Boulder, CO, Christopher of Germany and too many nieces and nephews to mention by name..

In lieu of flowers, Katy requested that donations be made to American Legion Post #189.

Per her request, Katy will be buried privately next to her husband Art in the Holy Trinity Catholic Church Cemetery in Hosmer.  Her sons will see to the internment.

Condolences and memories may be shared with her family at grammfuneralhome.com

To order memorial trees or send flowers to the family in memory of Catherine Burrer, please visit our flower store.