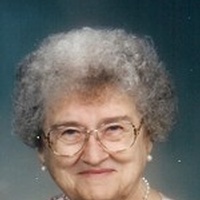 The funeral service for Lillian K. Batteen, 91, of Ipswich and formerly of Chelsea, is 10:30 a.m. Thursday at the Mellete United Methodist Church with Rev. Jon Damaska leading the worship. Following the service, burial will be in the Northville Cemetery.

Visitation is 4-7:00 Wednesday at Gramm Funeral Home in Ipswich and for one hour prior to the service at the church in Mellette on Thursday.

Lillian was born March 18, 1917 to William and Leona (Smith) Kingsley in Kent Township in southeast Edmunds County. During her youth the family moved around the area quite often. She attended school in rural schools and in Cresbard before graduating from Northville High School. She then attended Aberdeen Business College.

Following her schooling she returned to her parent's farm and helped on the farm.

Lillian married Norman Batteen on July 26, 1943 at Redfield, SD. They moved to California where Norm had been working for Lockheed Aircraft.

They returned to South Dakota, settling on his parent's farm south of Chelsea in 1945. Together, they continued the family farming operation until 1997. They moved to Ipswich the next year and continued to make Ipswich their home at the time of Lillian's passing on Friday, May 23, 2008 at Golden Living Center in Ipswich.

Lillian had been a member of the Richland Wesleyan Ladies Group, the Wesley Township Women's Group and 4-H Leader. She was fond of reading, needlework, gardening and crafts. She most enjoyed joining in Norm's work and really became his "handywoman."

She is survived by her husband, Norman, of Ipswich; one son, Dixon (Tracy) Batteen of Mellette; one daughter, Trudy (Mike) Thompson of Orem, UT; four grandchildren, Robb Batteen, Heather Moore, Christina Batteen, and Justin Thompson as well as 5 great-grandchildren.

Her parents, five brothers and one great-grandchild preceded her in death.

To order memorial trees or send flowers to the family in memory of Batteen Lillian, please visit our flower store.