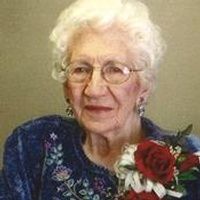 The funeral service for Anne Kiesz Ruby Heitz, 95, of Aberdeen and formerly of Ipswich, is 2:30 pm Monday, June 3, 2013 at Gramm Funeral Home, 720 North 6th Street in Ipswich. Interment will follow at the Ipswich City Cemetery.

Visitation is Noon to 3:00 pm Sunday at Gramm Funeral Home in Ipswich.

Anne was born on Valentine's Day, February 14, 1918 to Christian and Christina (Gugel) Kiesz on a farm near Leola, SD. She was raised on the family farm and attended country school through the eighth grade. Anne later earned her GED.

She married Bruce Ruby and to this union four children were born, Roland, Floyd, Myrna and Elda. Bruce died in combat during WWII just a short time after their youngest child was born. He is buried in France.

Anne later married Richard Heitz. They made their home in Ipswich and to this union five more children were born, Carolyn, Mary, Gary, Warren and Harlan. Anne worked as cook in restaurants in Ipswich.

While raising her family was of utmost importance to Anne, she also found a way to give much too many in the area. She loved to garden and liked all kinds of flowers, especially roses. Her huge gardens featured large colorful sections of flowers. While raising vegetables in her gardens to help feed her large growing family she always featured flowers as a focal point. During times that her flowers were in full bloom she would harvest flowers and have her children deliver them to everyone who was hospitalized in the Ipswich Community Hospital. She also created valentines for Veterans and was a lifelong member of the American Legion Auxiliary.

She had a passion for history and really enjoyed writing Ipswich history. She was instrumental in the painting of the mural in downtown Ipswich. Anne also found time to draw and left many wonderful drawing for her family to enjoy.

Anne died Thursday, May 30, 2013 at ManorCare Health Services in Aberdeen.

To order memorial trees or send flowers to the family in memory of Anne Heitz, please visit our flower store.