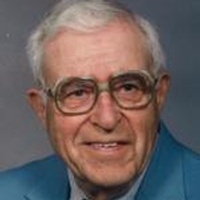 ) Mass of Christian Burial for Albert Kub, 98, of Ipswich, is 11:00 a.m. Monday at Holy Cross Catholic Church in Ipswich with Fr. Randy Phillips, Celebrant. Burial will follow at the church cemetery.

Liturgical Wake Service is 7:00 pm Sunday at Holy Cross with visitation one hour prior to both services at the church.

Albert was born July 30, 1912 to Frank and Mary (Novotny) Kub near Loyalton, SD. He attended country school and helped on his family farm.

Albert married Albena Sindelar on June 1, 1938. In 1945 he enlisted in the U.S. Army. During his time in the Army he served in Ft. Knox, Kentucky, Ft. Reilly, Kansas, Ft. Ord, California, Leyte, Philippines, and at the Aberdeen Proving Grounds in Maryland. It was while they were living in Maryland that their only child, Jeanne, was born.

They returned to Ipswich upon his honorable discharge in 1949. Albert became a butcher at the CO-OP Grocery that eventually became the Supervalu. He later worked for Country Pride Meats. Albert's career as a butcher lasted 40 years.

Albena passed away in January of 2008 and Albert continued to make Ipswich his home.

He remained in Ipswich where Albert was active at Holy Cross Catholic Church and had been a member of the Men's Foresters. He was also a member of the American Legion and had served on the honor guard. He was fond of spending time with his coffee buddies and talking walks. In his younger years Albert was an avid baseball player.

He was preceded in death by his parents, wife and one brother, Joseph.

To order memorial trees or send flowers to the family in memory of Albert Kub, please visit our flower store.