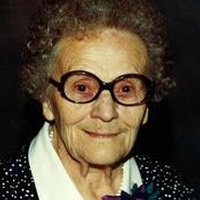 Mass of Christian Burial for Adeline Grabowska, 102, of Leola, is 10:00 am Saturday, September 17, at Our Lady of Perpetual Help Catholic Church in Leola. Burial will follow in the church cemetery.

Friends are welcome to join the family for a praying of the Rosary at 8:30 am Saturday at the church.

Adeline and her twin brother, Albert, were born on March 9, 1909, in the home of William and Barbara (Jung) Morrison. The Morrison farmstead was located northwest of Leola, SD in Arena Township. Adeline was the first born of six children to William and Barbara and spent her early years working on the family farm.
After completing her elementary education, she attended Northern State Teachers College in Aberdeen, SD where she received her teaching certificate.

Adeline returned to her home area and taught at a number of different country schools located in Arena and Long Lake Townships. She then took a teaching job in Koto Township, which is located north of Leola, where she met Clarence Grabowska at a barn dance which was the beginning of their relationship.


On June 8, 1943, Adeline married Clarence and moved onto a farm seven miles north and one mile east of Leola. It was there that they started their family of three boys; Glen (deceased) Joseph (deceased at birth) and Keith. After raising her family, Adeline began teaching again in Koto Township.

In 1968, Adeline and Clarence, left the farm and moved into Leola, but she continued teaching at the Hutterite Colony just west of Wetonka. Adeline retired from teaching and started working in the Leola Public Library. Clarence passed away in 1981. She continued residing in Leola until she entered the nursing home at Ipswich in April of 2004. Adeline then moved to the Bethesda Nursing Home in Aberdeen until she passed away on July 12, 2011 at the age of one hundred and two.


Adeline is preceded in death by her parents, her husband, two sons; Glen and Joseph, her brothers; Albert, Allen and Melvin Morison, her sisters; Eldora Fewings and Alice Feichert.


Arrangements through Gramm Funeral Home of Ipswich with an online guest registry at www.grammfuneralhome.com

To order memorial trees or send flowers to the family in memory of Adeline Grabowska, please visit our flower store.